Significance on the Playground

By Bruce
Published 5 months ago
Last updated 4 months ago

The other day, a friend was telling me about his frustration with some policy decisions that his government had made. Policy that would likely lead to ungodly results. And in that context, he expressed the need to fight against the direction his government is taking.

That might be a good thing. But I believe it depends a lot on what is meant by fighting...

For though we live in the world, we do not wage war as the world does. The weapons we fight with are not the weapons of the world. On the contrary, they have divine power to demolish strongholds. We demolish arguments and every pretension that sets itself up against the knowledge of God, and we take captive every thought to make it obedient to Christ.
(2 Cor 10:3-5 NIV)

The implication here, is that we are to use "weapons" which are very unlike what we might naturally think a weapon to be. Although they are powerful when destroying strongholds (defined here as thoughts and attitudes which are in opposition to knowing God), they are never meant to be used for destroying people—regardless of how evil those people might seem to be.

Jesus used the imagery of light to describe true life, and darkness to describe the strongholds. And he said:

“I am the light of the world. Whoever follows me will never walk in darkness, but will have the light of life.”
(John 8:12b NIV)

In other words, the key to dispersing darkness is following Jesus. Following means doing only what we see him doing, and speaking only what we hear him saying. It is not about chasing down darkness so much as it is about being light.

In the natural world, darkness is not in itself an entity, but the absence of light. You can go to the store and buy a light bulb, but you can't buy a "dark bulb." We who are light can shine, but darkness can't actually unshine—it can  only creep into those places where light is lacking. We don't demolish darkness by attacking it, but simply by shining.

And so, this "fight" has some surprising characteristics, one of which is picnicking. Psalm 23 tells us that, in the presence of our enemies the Lord lays out a picnic. Similarly, Rev 3:20 states that, in the context of arguments and pretensions which have clouded our perception of reality, Jesus desires to come in and eat with us. Consequently, food and fellowship with the Lord is powerful to disperse darkness.

A typical place for a picnic is in the park. And if there are children present (and we are all God's children) then you would set up near the playground. Now, I'll have to save the full explanation for another day, but trust me when I say that Prov 8:30-31 is about Jesus playing in the presence of God and the world. [Many English translations use the verb rejoicing rather than the more accurate playing used by most translations in the Germanic tradition.] The implication is that the whole world is the Lord's playground, and he delights in mankind who dwells there. 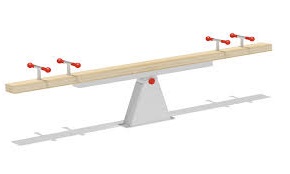 Standard equipment at most playgrounds includes a seesaw (or teeter-totter, or in Norwegian a humpedisse). The thing about a see-saw is that your significance is measured by your position. Even though I weigh nearly ten times as much as my (very young) grandson, he can still lift me off the ground if he is sitting out at one end while I am sitting on the other side but near him.

Which illustrates another "weapon" in our arsenal. The more I reflect the nature of God, the more darkness is dispersed. Rather than engaging the darkness in hopes of dispersing it, I simply need to keep moving farther toward the end of the seesaw. Rather than fighting the evil, I am invited to follow Jesus in the direction he is going.

Unless I communicate love, I am only making noise. Unless love permeates my thoughts, they are meaningless. Unless my actions are immersed in love, they are worthless.

It is not enough to appear to be loving. It's not about behaving in a loving manner. It is a matter of having love. It is about being so filled with the love of God that we can't help but leak love all over the place.

In the kingdom of God, significance is measured by how you treat those around you on the playground of life. And you can only get there by drowning in the love of God.