Thirty-four years ago today, I found myself wandering the streets of Bergen, Norway. In those days, it was my job to travel to cold and dark places where I would spend hours watching the Aurora Borealis. I had just spent four weeks, mostly alone, at the Northern Lights Station near Longyearbyen, Svalbard—about 600 miles north of Norway. 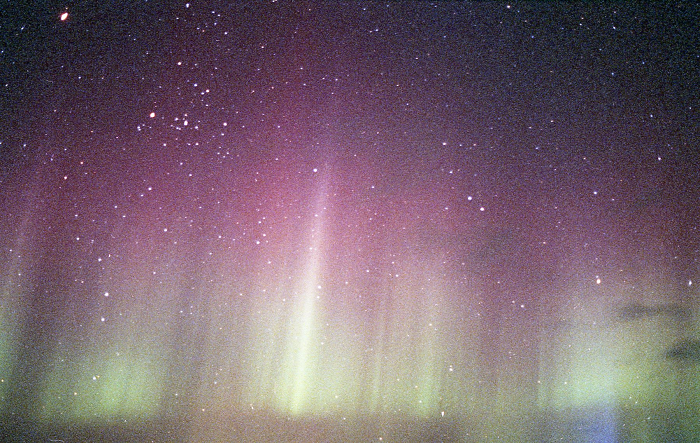 My plan was to visit a friend in France; but at that time, France required visitors from all countries to have a visa. Applying for a visa at the French embassy in Oslo meant giving up my passport for the weekend. Confined to Norway until I had gotten it back, I somewhat randomly decided to take the train to Bergen for a couple of days.

The streets of Bergen are typically quiet on a Sunday morning. But the receptionist at my hotel had pointed me to a "small Baptist-like church" downtown, which he thought was kind of nice. I walked by to see what time they met, and showed up shortly before the scheduled meeting time.

I should perhaps mention that in those days, my church in Alaska was frequently standing room only. So I was used to crowded worship services. That turned out not to be the case here. As a visitor, I intended to place myself a good ways back, where I figured I would not be too conspicuous. Wrong. I was both conspicuous and farther forward than many of the others in attendance.

Father God was setting me up.

This was my first time travelling alone in a non-English-speaking country. I had learned enough Norwegian to barely survive as a tourist: some numbers, please, thank you, where's the toilet—stuff like that. But deciphering a worship service in Norwegian was beyond me. Still, it seemed nice.

After the service, the meeting leader, Ellen, came over to greet me, in Norwegian. Not understanding a word she said, I responded with a "Huh?" and she rightly presumed me to be an American. Before long, several of her friends and I were invited to her home for lunch. That was also nice.

In the afternoon, I was out wandering the city again. It being a Sunday, virtually nothing was open. I had managed to decipher that the church had an evening meeting. However, I had not understood that it was a prayer meeting. I ended up attending a gathering of a handful of elderly ladies, Ellen, maybe one or two others, and me. A bit awkward.

But something was up. Ellen and I exchanged addresses. And we began writing.

Back in the previous millennium, one communicated over long distances by writing letters. It worked like this: You write your thoughts on a piece of paper, wrap it up in another piece of paper (called an envelope), and take it to the post office. Days or weeks later, it arrives at the home of the person you sent it to. If they choose to respond, it takes at least as long for the reply to get back to you.

In today's age of social media and online video, all of that seems kind of clumsy. But it turned out to be the right medium for what God was doing in my life at that time. Ellen and I have been married for 32 years now.

Consider the logistics involved here. Neither of us, at the time, was intent on finding a spouse. And yet, with Father's nudging, a barefoot Alaskan walked into the life of a seemingly sensible Norwegian lady. Without the visa requirement (which only existed for a short period of time), I would not have visited Bergen. And happening to stay at a hotel with a receptionist who happened to know about that small church, was a long shot. There were a lot of unlikely events that lined up. But I sure am thankful that they did!

It's a lifestyle of following.

But they that wait upon the LORD shall renew their strength; they shall mount up with wings as eagles; they shall run, and not be weary; and they shall walk, and not faint.
(Isaiah 40:30-31 KJV)

In this context, waiting is not sitting passively. Neither is it impatient frustration.

If you have ever walked any distance with a child, you have probably experienced that they either want to run on ahead and take shortcuts, or you need to almost drag them with you because they are so weary.

But when they walk hand-in-hand with their parent, keeping pace and thriving in the fellowship, then strength is renewed. That is the lifestyle of following. The goal is far less important than the walk. And when walking hand-in-hand with Father God, he frequently reveals unexpected blessings.

That's his nature. Where he goes, and we follow, peace and blessing abound.